Codependency
The symptoms of codependency have a remarkable parallel with the symptoms of addiction, but with one important difference. Addicts’ “highs” depend on access to their drug or behavior of choice. When they have it, they are high; when they don’t, they are low. They can and do alter their moods simply by thinking about using the substance (or thinking about not using it), to the point where they can develop a preoccupation that is as mood-altering as using.

Codependency at its essence is an addiction to a person or to a relationship. Actually, there doesn’t have to be any substance use involved for codependency to exist. Many people are codependent long before they meet their addicted loved one.
No one, of course, is born codependent. Codependency is a learned behavior. Unfortunately, many of us learned the dynamics of codependency very early in life, in families that did not know healthier ways of relating. A simple example of the way that families encourage codependency might help.

By itself, the sign was not particularly troubling. Maybe it was a kind of in-joke in the family. The disturbing part of this experience began, however, when the three young children entered the kitchen for breakfast. The very first thing each of them did was to look at the sign to see how Mom “was” today. I contemplated what might have gone through their minds as they dressed for breakfast and headed downstairs. Were they anxious about what the sign would say? If the sign said “sad,” would they try to think of things they might do or say to make Mom happy? If the sign said “happy,” would they spend their energy being extra careful not to do something to make Mom sad?

This mundane example illustrates the central dynamic of codependency. In the worst-case scenario, we have a mom who is putting the responsibility for her moods onto her children. She controls the behaviors of her children with the simple flip of a sign. We have children who are learning that the way for them to be happy is to keep Mom happy. Their “job” is to control and maintain their mom’s mood by acting or not acting in certain ways. Even if the worst case is not true, there are no good scenarios that result from this kind of relationship dynamic. It is the soil in which codependency grows.

Relationships with religious addicts can lead to religious codependency.

Some time ago I received a letter from a woman describing a series of painful experiences of spiritual abuse in a small, independent church. She talked about leaders who bullied the members into religious activities by holding hostage their right standing with God based on those activities; about employees of the ministry who were underpaid, while leaders were making a comfortable living; about the absence of financial accountability; and about questioning of the leadership being equated with questioning God. The church leaders were misusing their authority by controlling and manipulating, instead of serving and equipping, the members of Christ’s body.

At one point in the letter she posed this question: “Why do 300 people allow one man to control their each and every move, even though they, at best, question it or, at worst, know it is wrong?” What a great question! Was the answer simply that the people were unaware of the problem? The letter made it clear that many in the congregation knew that things were not right. Was the answer a lack of courage? I suppose a factor could be the fear of a strong, charismatic leader; the fear of being humiliated publicly; the fear that they might lose everything for which they had invested their souls and finances; or the fear of having a falling out with God by disagreeing with his official “representative.”

But there is another possible explanation. Could it be a matter of religious codependency by the members? Is it possible that these people had been trained to believe that one of their primary “jobs” was to keep the leader happy? Could it be that the congregation had learned that their “happiness” was dependent on the happiness of their leader? Our experience over the years with many, many Christians who have found themselves in similar situations suggests that this could certainly be the case.

If you find a leader who is a religious addict–whose mood depends not only on the amount of his or her own religious activity but also on the amount of religious activity performed by the members of the congregation–then you can be sure there are some religious codependents in the neighborhood. Religious codependents may believe that their behaviors are a simple matter of devotion to God, to God’s people and to the leadership that God has appointed, just as codependents to alcoholics often vigorously defend their behaviors. But the real motivations are often much more complex. If I feel good only when the leader feels good, if I feel bad only when the leader feels bad, it’s probably for a reason other than being “committed and dedicated.” It’s probably some form of religious codependency. This is especially true if my need to please a leader leads to compromises in my own integrity, peace, rest, and “that sense of blessing I once had.”

There is a curious phrase in Jeremiah 5:31: “The prophets prophesy lies,/the priests rule by their own authority,/and my people love it this way.”

My people love it this way? How can that be? Well, I suppose one reason could be that some people prefer to not think, and so they are happy to have someone else do all their thinking for them. It is more likely, however, that some people in religious circles are happy only when they can be in control of spiritual things, even if their authority is a figment of their religious addiction and is not from God. And for every religiously addicted leader there is almost always a group of religiously codependent followers. There are people who are happy only when their spiritual leader is happy. This is not just dedication and commitment, no matter how vigorously the dysfunction is defended.

Relationship with a codependent God leads to religious codependency.

A second, related form of religious codependency results from serving a codependent God. Suppose for a moment that God has poor boundaries. Or that God spends his days in a frenzy, trying to get us to make the right choices. Or that God’s mood is completely dependent on the choices we make: happy when we make good choices, but sad when we make bad choices. Or suppose that God is full of resentments because he is always the one who has to solve the world’s problems. Or suppose that God is manipulative, trying to get things to work his way by using indirect and dishonest means. If we serve a Higher Power with any of these characteristics, we are probably in for a very troubled relationship. It is possible to serve a codependent God, but it is physically, emotionally and spiritually exhausting.

If we were raised in an environment where codependency was common, we may gravitate to a “God” of this kind. This form of religious codependency is typically learned early in life. As young children many of us were taught that God’s mood was dependent on our behavior. If we did certain things, God was happy. If we did other things, God was sad. We were, apparently, powerful enough to be in charge of God’s mood! Now, does it make sense for a six- or seven-year-old child to be in charge of God’s mood? Clearly not. And what does it say about God? Does God have such poor boundaries that his mood will swing in response to my behavior? In spite of how little sense this makes, this distorted image of God leads many of us to tip-toe through our Christian lives, trying to do everything possible to prevent God from having a negative mood-swing. Because, after all, you know what happens if we do something that puts God in a bad mood. We are in deep trouble and are going to pay the price one way or another. We need to get up in the morning and look to see what God’s little flip sign says today. Is it “Today God is happy,” or “Today God is sad”? If the answer to that question determines the things we have to try harder to do, or not do, in his name today, we can be pretty sure that some element of religious codependency is involved.

Most Christians, of course, understand that their relationship with God involves dependency. We depend upon God for our needs, for our identity, for life itself. This is not a problem that needs to be solved. We are dependent on God. Unfortunately, however, many Christians have a difficult time distinguishing between a healthy dependence on God and an unhealthy dependence, or codependency. And that inability to distinguish between healthy and unhealthy relationships is the vulnerability that makes religious codependency possible.

If you find yourself stuck in religious codependency, here are a few ways to move forward. First, if your higher power is a religious addict or a codependent god, fire him. These gods do not deserve your worship or service. They have become what the Bible calls idols. You don’t negotiate with idols. You don’t compromise or make deals. You don’t hope for improvement in the future. Instead, you clean house. That’s what has to happen first: house-cleaning of all idolatrous attachments. Easy to say but difficult to do.

Second, get help. Most of us can’t make the necessary changes by ourselves. Religious codependency usually has very deep roots; most of us learned it very early. That means that the changes we need to make must not be superficial changes. They require major surgery. For example, we need to develop healthy boundaries in our relationship with God. If that sounds strange, or just plain wrong, well, that’s a hint of how deep the problem goes and how deep the healing needs to be. That means it’s important to find a therapist, sponsor, pastor or friend who understands these issues. This also is easy to say but sometimes difficult to do.

Last, and perhaps most important, believe that recovery from religious codependency is possible. Codependency is learned behavior. That means it can be unlearned. It’s not easy to unlearn it. But it is possible, because God also wants a healthy, noncompulsive relationship with us. And that is good news. 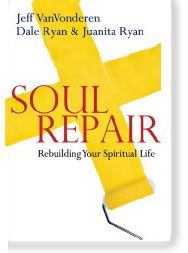